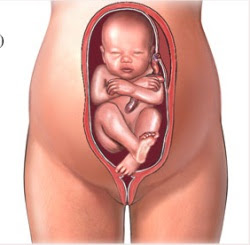 The words “Breach” and “Breech” are often confused and misused.

When you are talking about the loss of data inside of a protected computer network, that is a BREACH. And you can read the latest about Data Breaches at Data Breach Watch.

When you are talking about the unfortunate, and sometimes deadly situation of a baby being born with the feet coming out of the birth canal first, that is a BREECH BABY. See picture at the right.

See below about the usage and definition of the word, "breech."

1 plural \bri-chez also bre-\ a : short pants covering the hips and thighs and fitting snugly at the lower edges at or just below the knee b : PANTS

2 a : the hind end of the body : BUTTOCKS b : BREECH PRESENTATION; also : a fetus that is presented breech first

3 : the part of a firearm at the rear of the barrel